Suspending the car permit in Peru

The process to suspend the temporary import permit of a vehicle is a bureaucratic rat race but doable with enough time at hand. The nerve-wracking thing is that Peru has very strict rules for overstaying the import permit, which will likely result in the confiscation of your vehicle. It seemed a good thing to wait for an approval before leaving the country. In our case this took 2,5 weeks, so it isn’t a very fast process. The reverse process was done in two days. 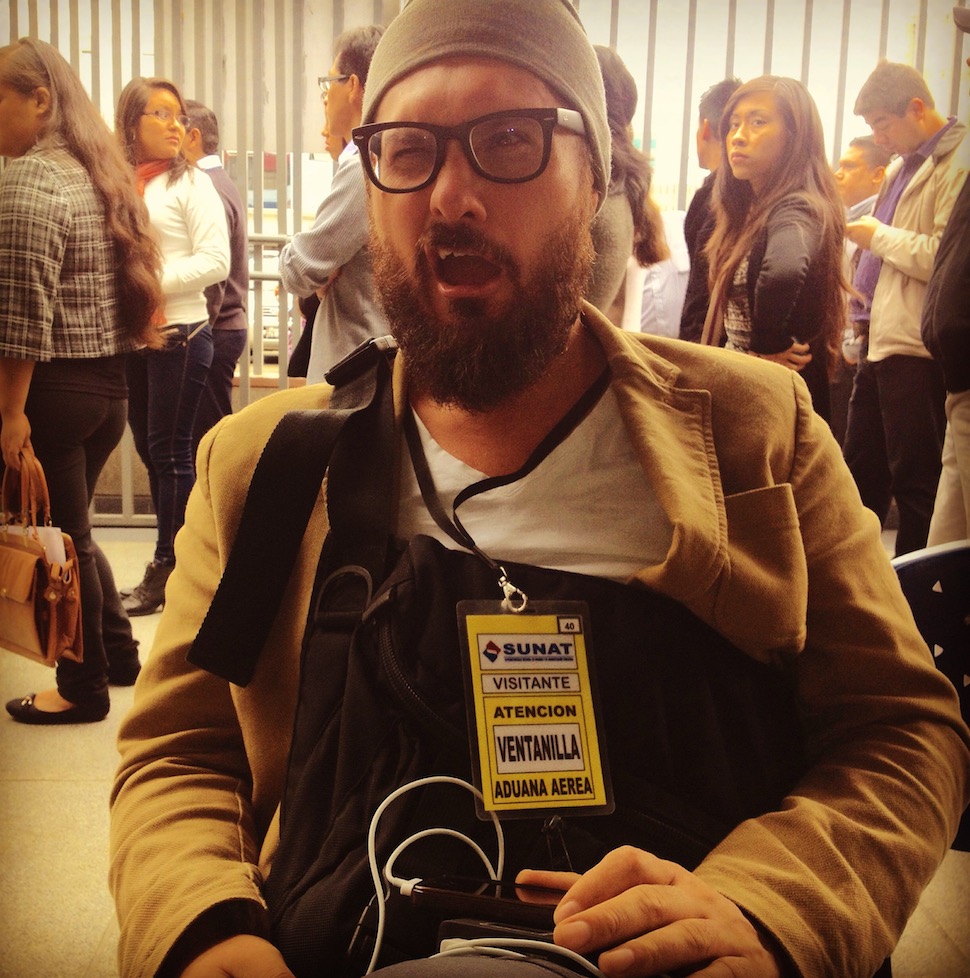 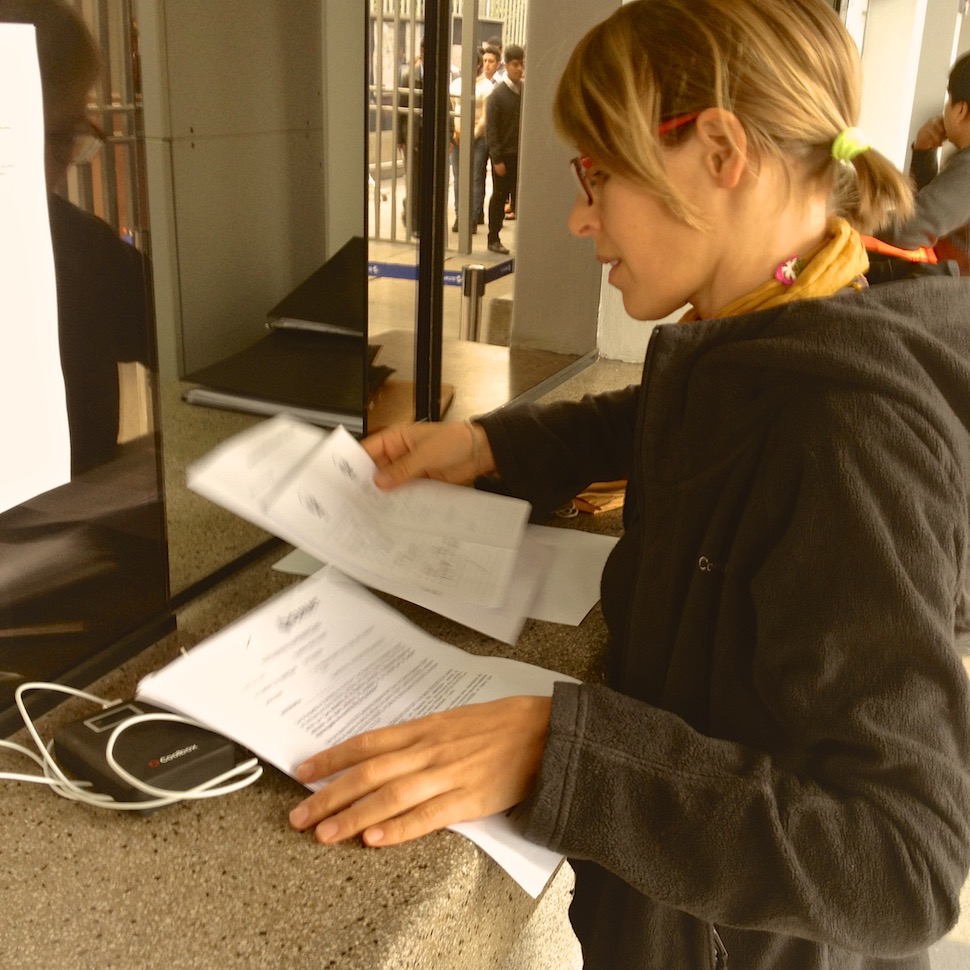 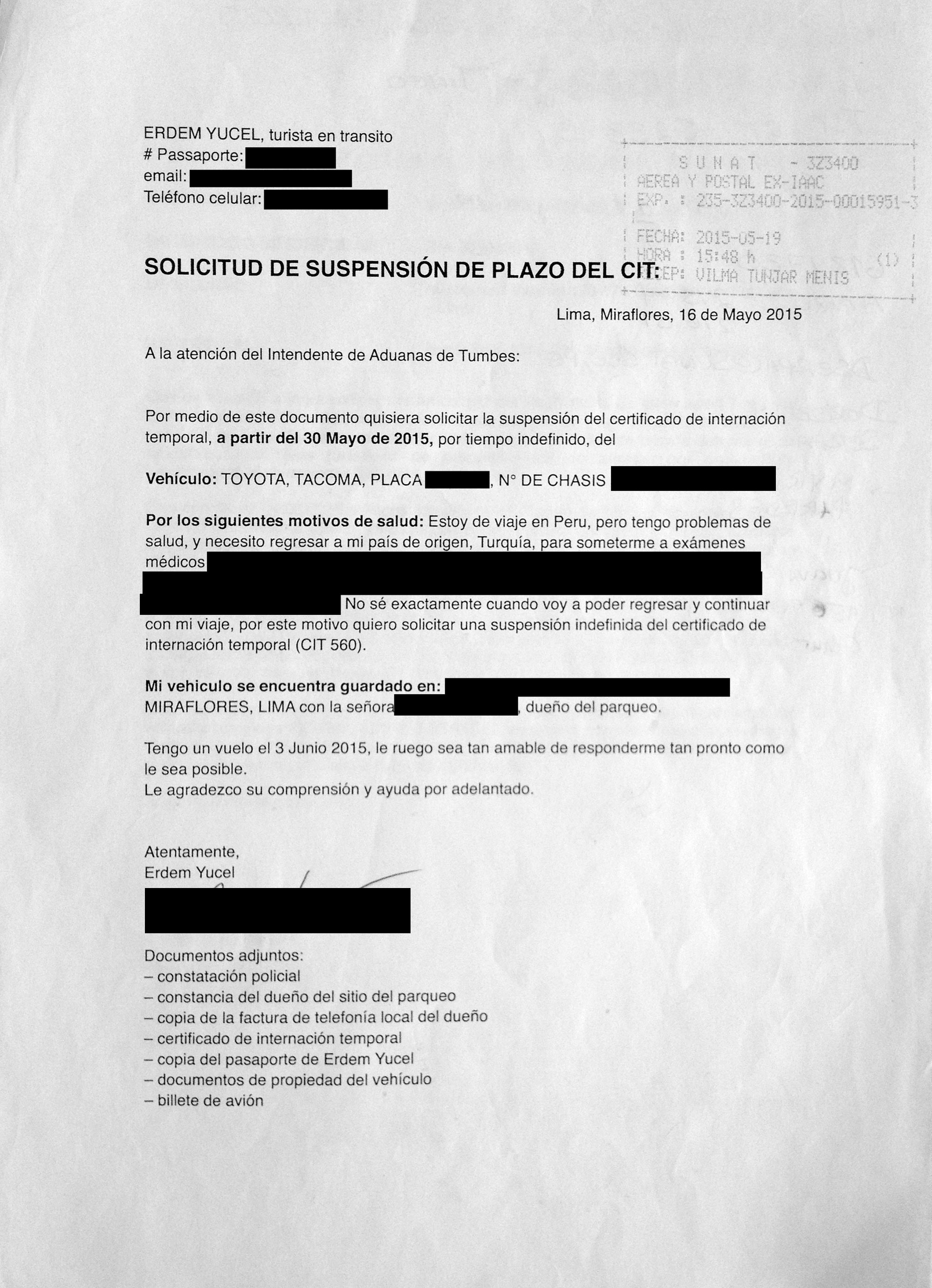 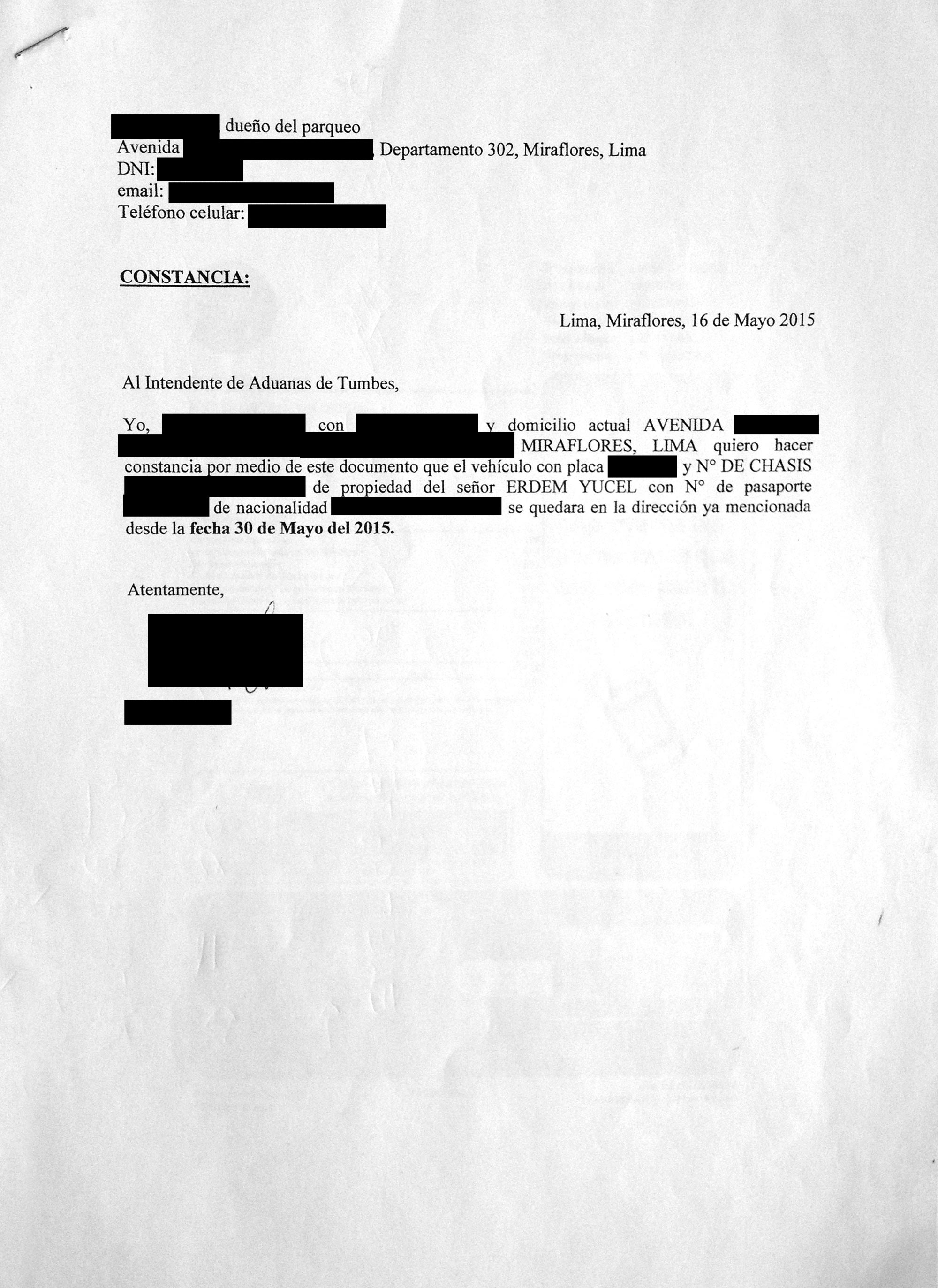 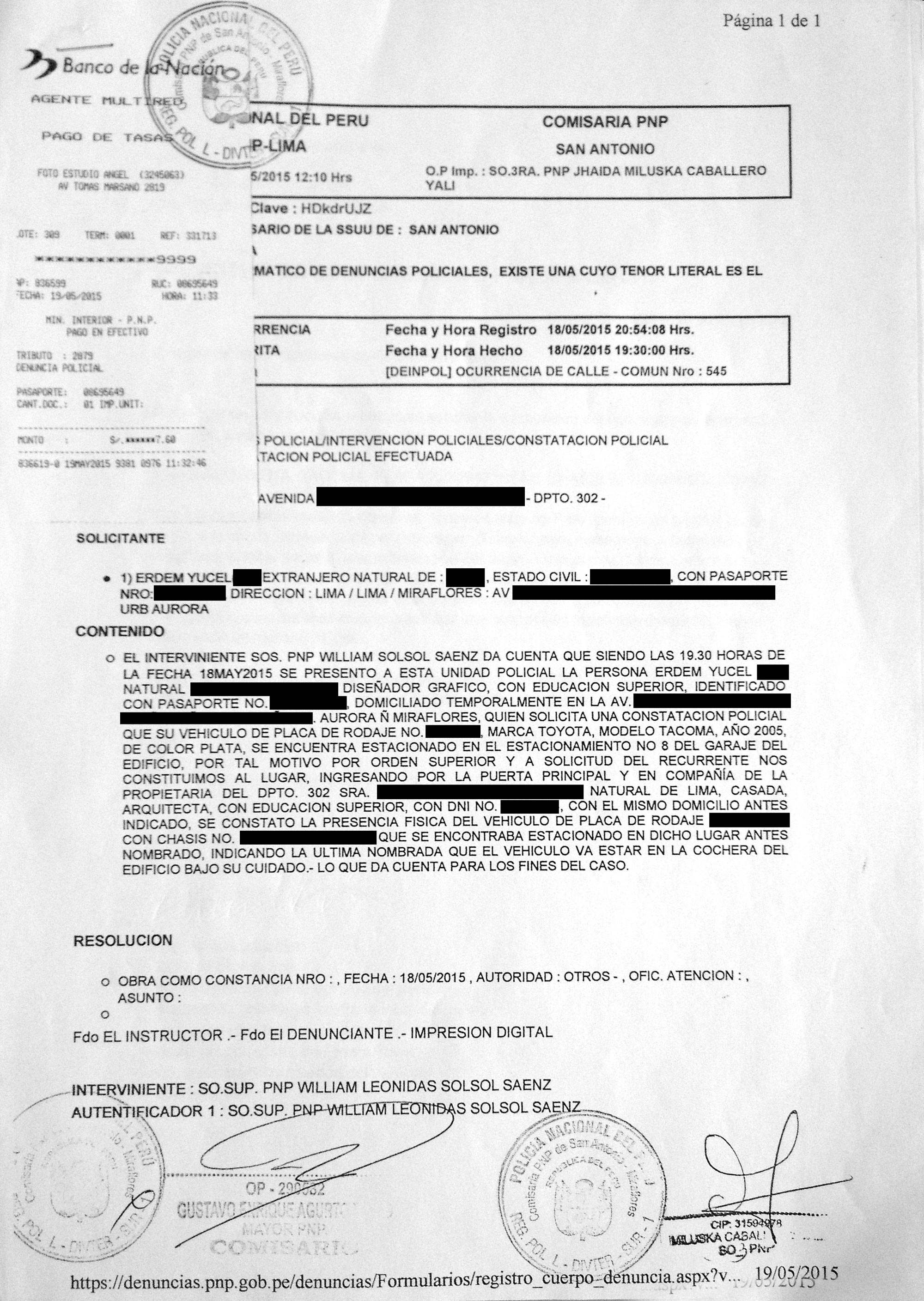 It’s good to have two copies of the whole package. One for you, one for the aduana.

About two to three weeks before departure, we parked our car in the storage location. In our case it was a private garage in Lima.

We had the parking lot owner write a letter with their information (address, ID) stating that the car will be parked under their supervision. We also got a utility bill from them associated with the parking address, to prove ownership.

We prepared a request for an indefinite suspension of the temporary import. We heard that the main reasons that will automatically be approved are either the owner’s medical problems that force him/her to leave Peru, or mechanical issues of the car, which result in not being able to move it out of the country soon enough. We were told that other reasons may sometimes not be approved.

After parking, we went to the nearest police station and convinced a policeman to come with us to make a “constatacion fisica”. The highest official was happy to follow us immediately (he of course did ask for taxi money and a tip “for a can of soda” after, but the whole procedure was quick and easy).

The policeman wrote us a report that notes the location of the car, the license plate, owner’s name and passport number, parking spot owner’s name and ID number, etc. We had to pay the official processing fee (S7.60) at a Banco De La Nacion, or a Multi-Red office. With the receipt we could pick up a certified copy of the report the next day.

Then, we made tons of copies of everything related to the car: the title, registration, owner’s passport and visa, drivers license, temporary import permit, the statement of the parking lot owner and our own letter, flight tickets etc. We created two sets of copies, one of them including the original police report and the original import permit (if you dare – we didn’t submit the original until we got back, and it wasn’t a problem).

We brought all this to the aduana office SUNAT by the airport in LIMA (Centro Commercial de Aduanas). They asked us to number the pages in red pen from back to front and staple the package (this is no joke!). They took our stack of papers, and put a stamp on a copy of our letter, which gave us a case number and served as proof of receipt. Then they mailed it off to the border office where we entered the country (we checked by phone many times and it took over a week for the package to arrive in Tumbes. By the way, aduana offices don’t answer or receive emails from outside so no need to try that route).

It took a few phone calls to find out who will actually process our request.  We told the official (in our case Clever Emelgarejo #956902602 *0058235 – emelgarejo@sunat.gob.pe) that we’re foreigners in transit, and that we need the result via email. We had to call many times. In our case the paperwork arrived long after two weeks had passed at the parking lot address. Finally an email arrived two minutes after a phone call, just one day before our flight, when we were nervous enough to actually beg and call five times in a day for an answer. All together receiving the answer took about 2.5 weeks from the time we gave our paperwork to the aduana in Lima.

The reverse process wasn’t as complicated. We went to the aduana not having any idea what we needed to do. We spoke such bad Spanish on purpose that the receiving office decided to write the necessary letter to the processing office. So basically they wrote it to themselves. Long live bureaucracy! We needed a copy of the aduana letter which had permitted the suspension, the car papers, and passport. The official offered us to immediately come with us and inspect the vehicle and parking location to make sure it’s at said address. We had to pay the taxi ride including his ride back, but it didn’t take long and the next day we could already pick up our new permit. We were allowed the remaining days we hadn’t used up on our first permit.

Here’s the letter that the aduana wrote to themselves: 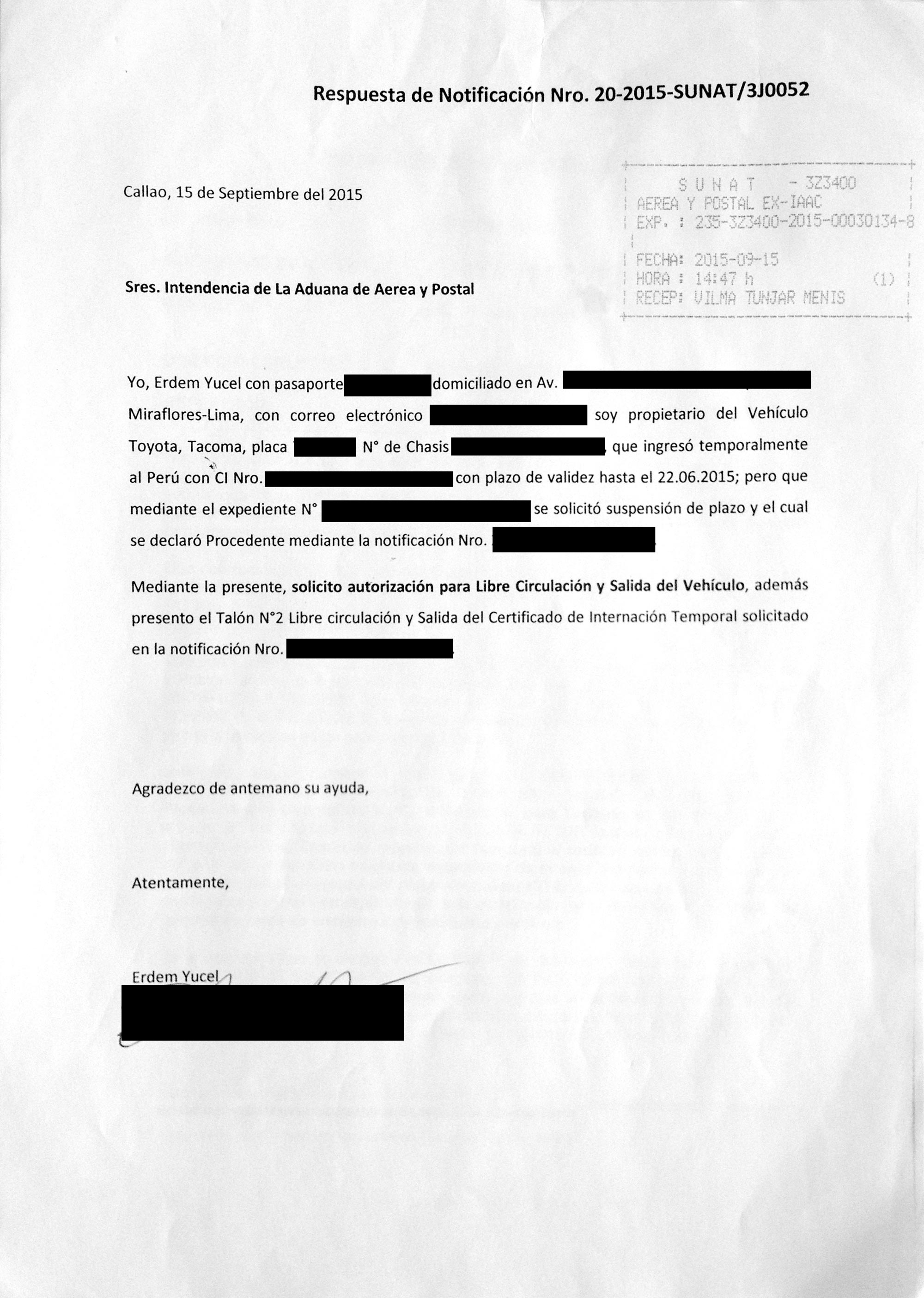