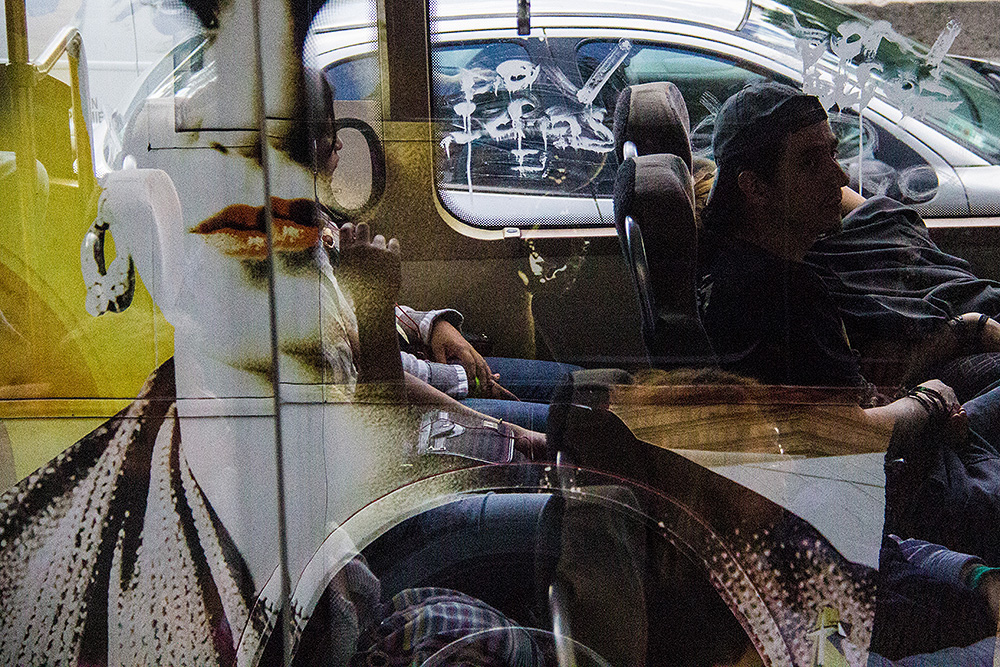 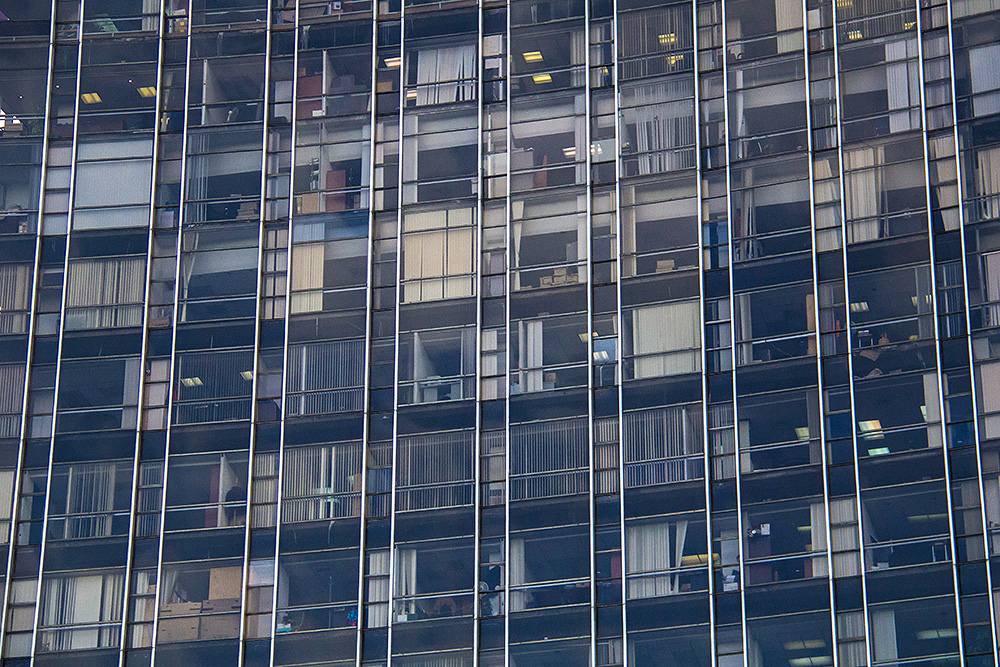 If you live in a city, you consume it in such a way that it becomes impossible to see it from an outsider’s point of view. You create a personal map of it based on your needs, musts, memories and conveniences. Most urban dwellers never get to visit some sections of their city. In fact, no matter where we live, every one of us has an individual city of our own and we hardly ever get out of it. That’s why, it’s exciting to visit a new metropolis and experience it without having to live in it. There are only so many in the world and Mexico City is surely one of the largest and oldest. 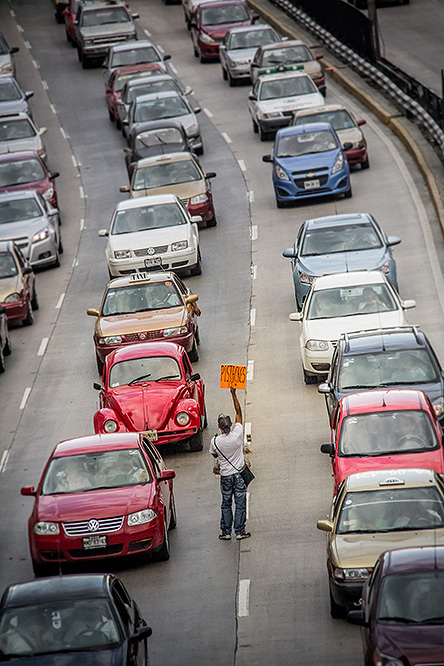 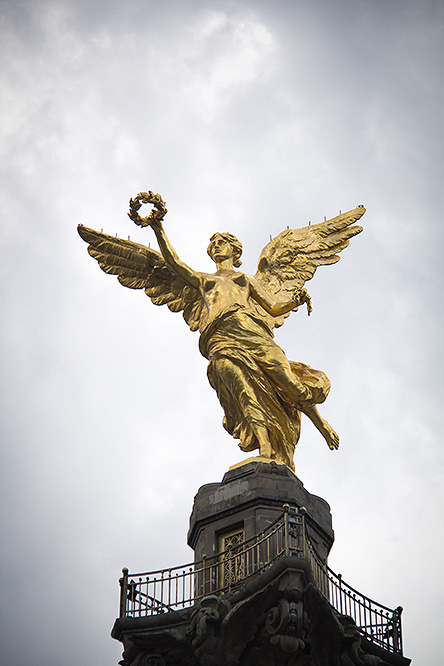 Mexico City begins before its physical boundaries. Signs and warnings of its scale, fame and dangers were catching up with us already 175 miles away from it in San Miguel de Allende. Our freshly made campground friends had warned us about the traffic and the added trouble of police corruption on the highways leading to it. Locals can only drive their cars on specific days of the week based on the last digits of their license plates. We had to apply for a visitor permit to drive here. Despite this extreme measure, traffic is still a big issue. It took us three hours to drive the hundred and fifty miles leading to it, and another two hours to drive the last ten miles inside. We had to use our pee bags inside the cabin. Luckily, we did not encounter any police. Heavy rain may have something to do with the lack of them. 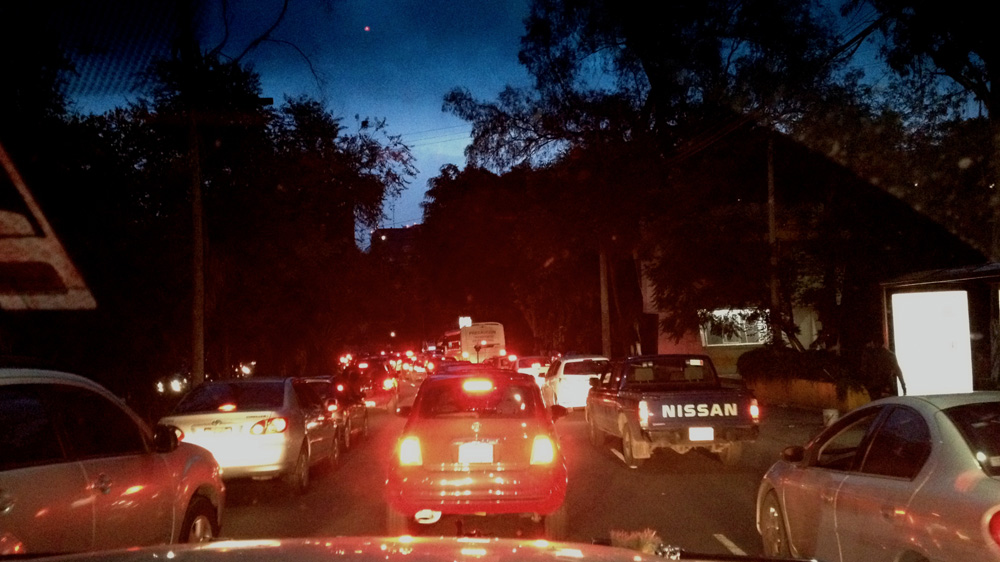 But we did have an accident! Less than a mile shy of our destination, a car rear-ended us at the highway exit. No one was hurt. 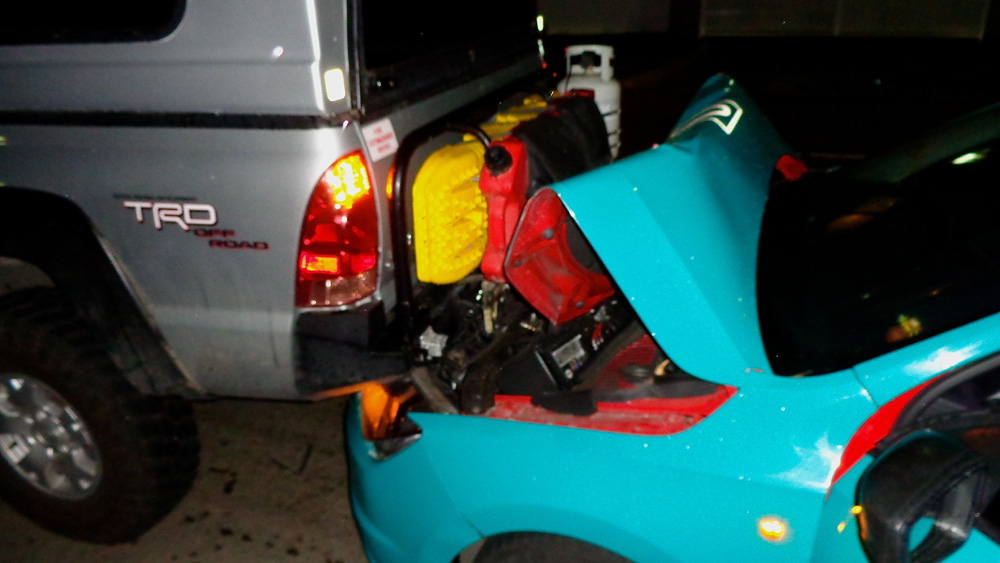 The driver seemed to be well aware of his fault hitting a stopped car at a stop sign and ensured me in Spanish that insurance would take care of it. 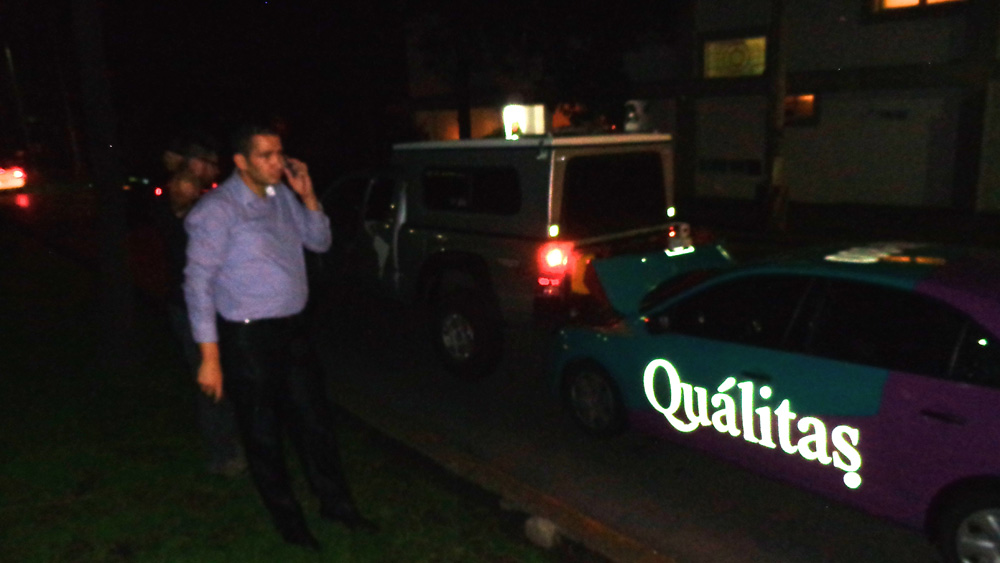 He was pointing to the huge decal on his car and trying to explain me that it was an insurance company car. ‘Qualitas’, one of the major insurance companies in Mexico crashed into us! What a luck! His car was totaled, meaning that the damage on it was estimated to be more than the cost. 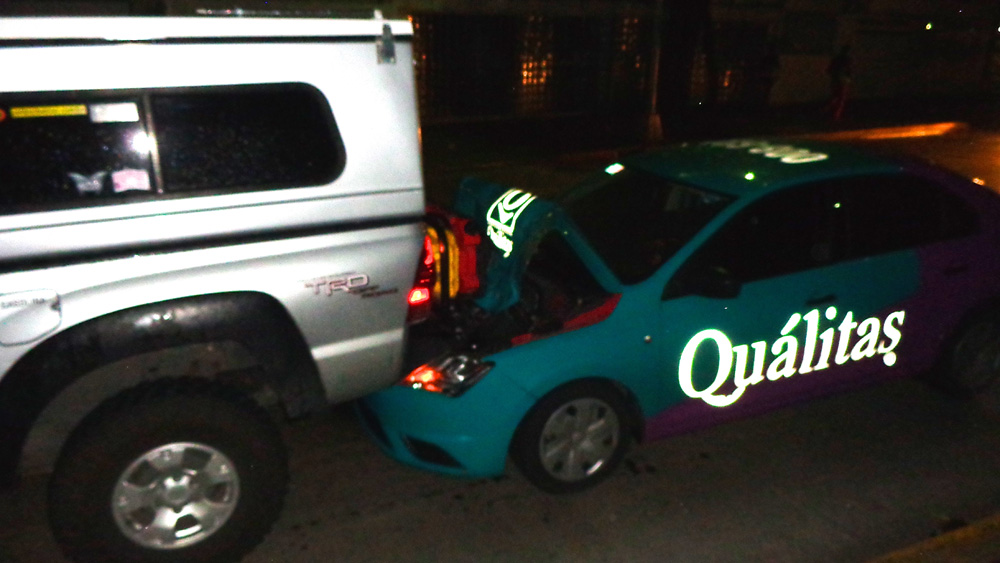 Strangely, our steel rear bumper and high clearance had protected ours. Magically, there wasn’t even a scratch on it. A little paint from the other car had rubbed on to the Hi-Lift jack mounted on the swing-arm. That’s it. Bruteforce Fabrications makes one hell of a bumper… 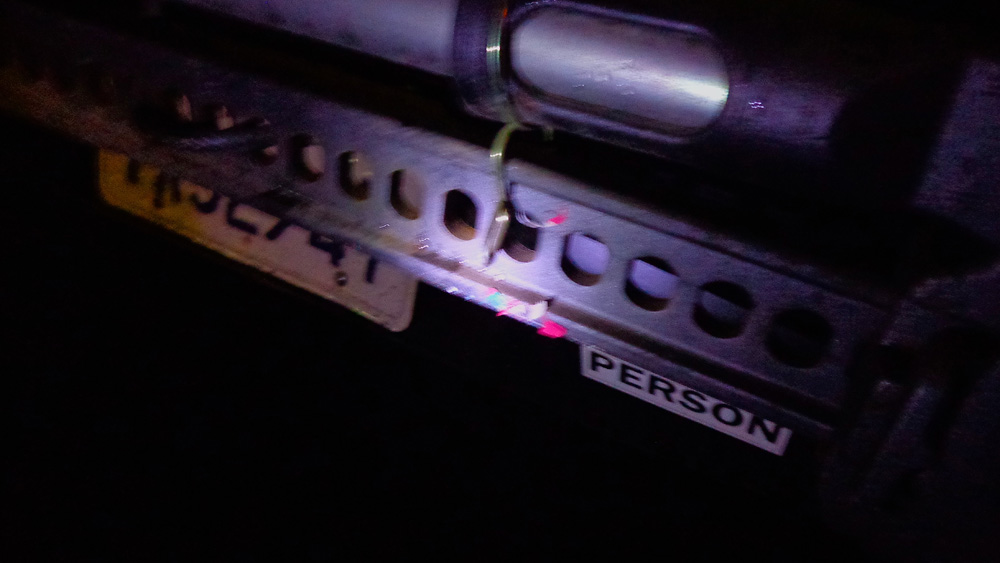 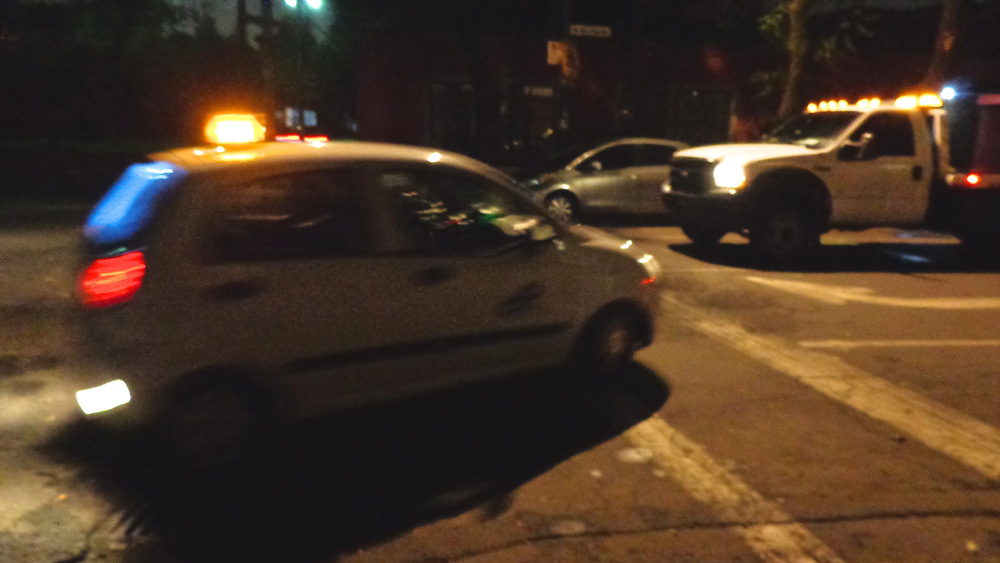 I told the driver that I had a migraine attack I had been fighting for the past hour, asked him to talk to Sarah who was still amazed at our luck. I puked right there on the asphalt as I finished my sentence. As if that was not enough, I also peed on the corner and immediately retired to the cabin for a migraine induced sleep. 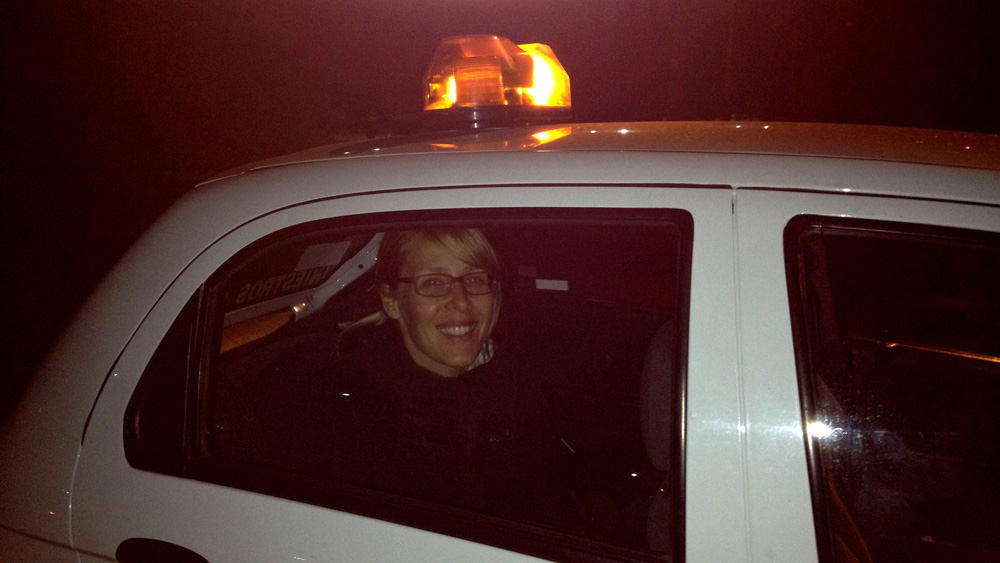 When I woke up, Sarah had taken care of everything! What a girl! She managed to call our insurance company, talk to everyone, and arrange all the paperwork needed. 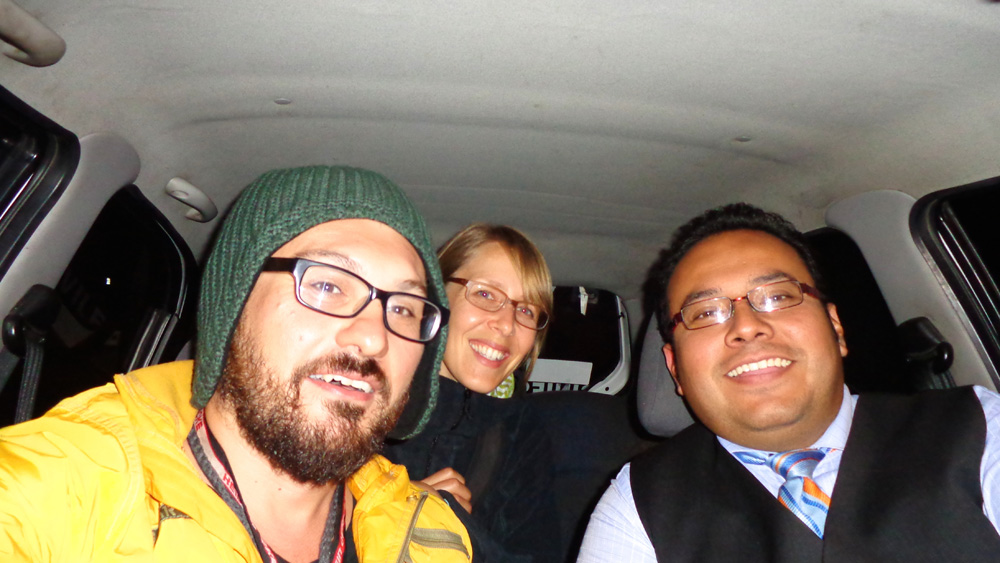 All I had to do was to take a few selfies with the insurance guy.

Our destination in Ciudad de Mexico was a cute old part of it called Coyoacán. Serkan, an old friend from Los Angeles had moved here several years ago after falling in love with a beautiful Mexican girl called Gladys. They are running a visual effects studio called Epics. They gave us their company guest room and also provided safe parking right in the center of Coyoacán, walking distance from some of the best restaurants and pubs in the area. 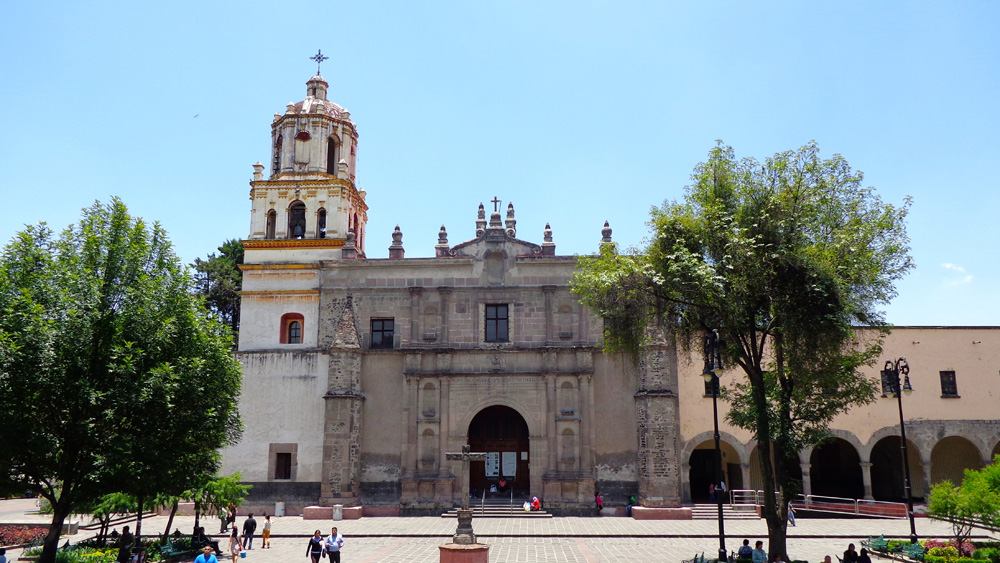 Coyoacán is truly a gem in the city. It preserves its antique character with volcanic stone buildings, green parks inviting a variety of colorful city dwellers including the Mexican Hare Krishna Community! 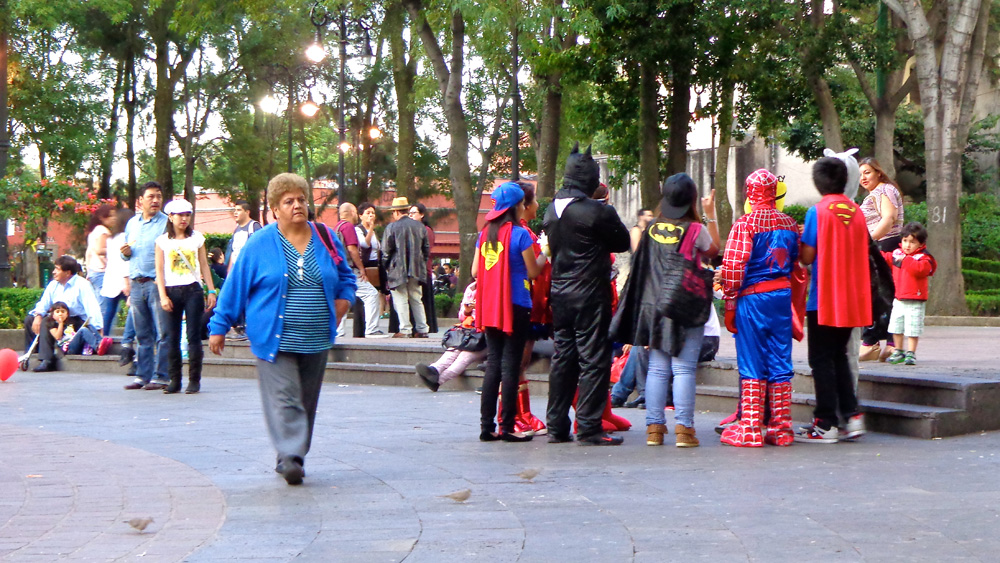 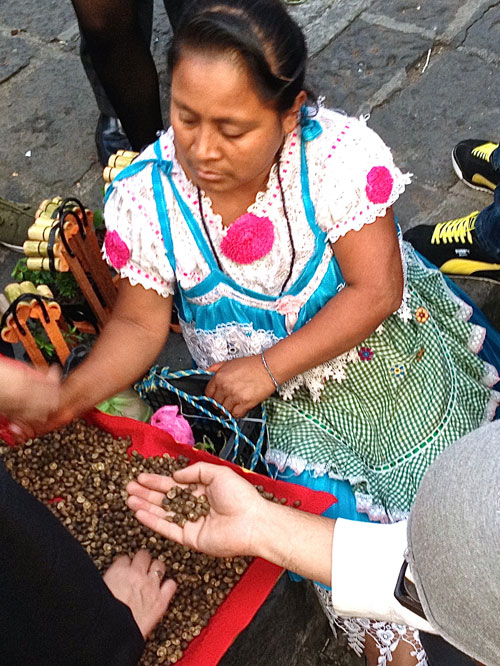 The lady here is selling “Mexican Jumping Beans”! The bean flowers are impregnated by a moth and the larva lives inside for almost half a year. It must get boring after a few weeks. 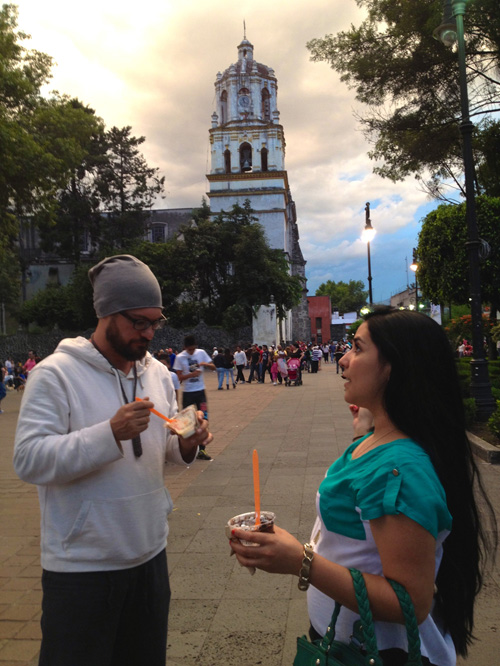 Gladys bought us three jumping beans which we immediately adopted as our new pets. Their names are Maria, Jose and Gabriella! They have been jumping ever since.

Below is what happens over the years when people walking by decide to stick their chewing gums on a tree. An anonymous, crowd-sourced street-art project! 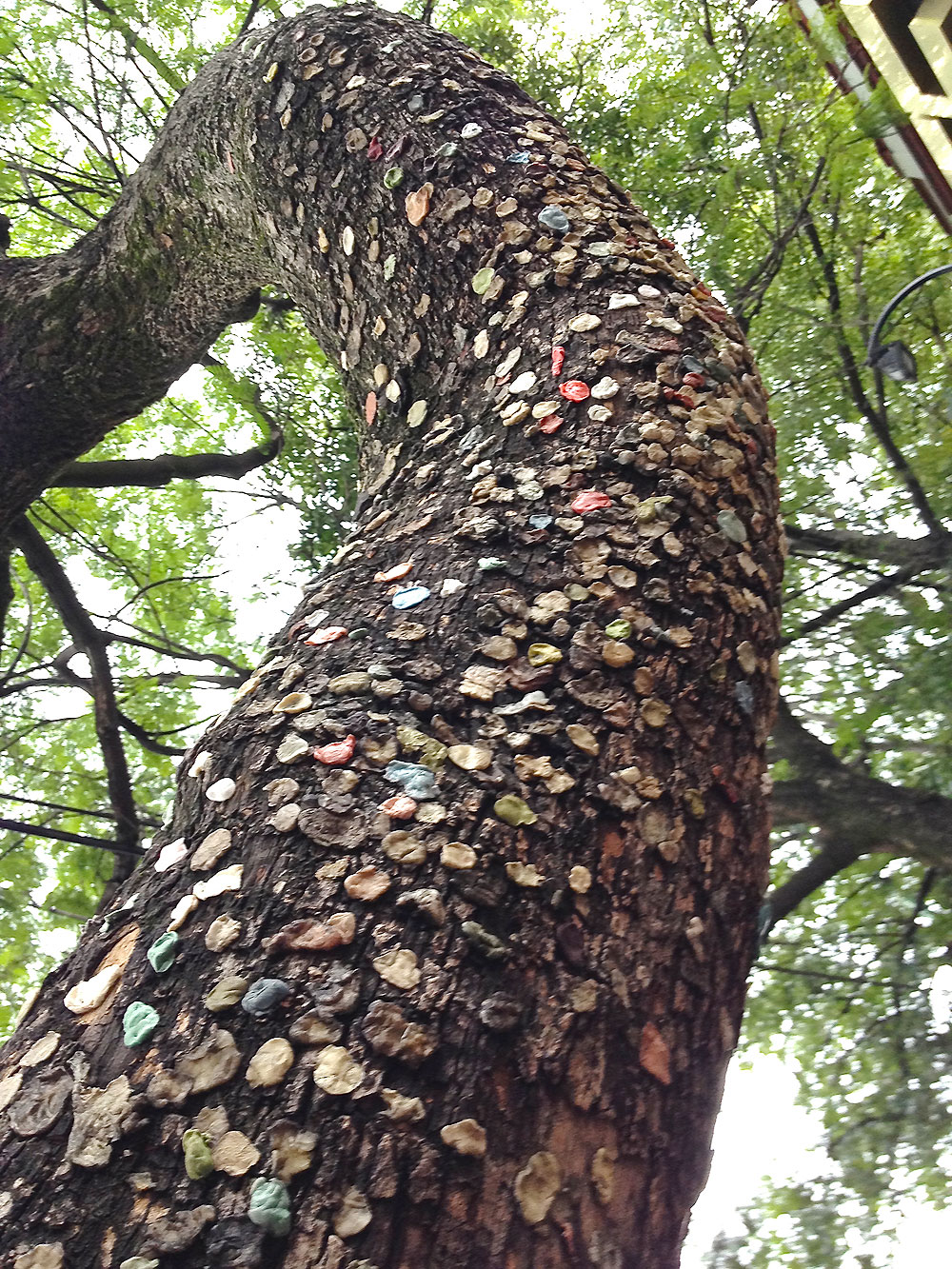 Coyoacan is also home to Frida Kahlo and Diego Riviera. Their house is a museum full of personal objects, art and costumes. The famous couple have indeed dissolved the separation between art and life. The way they live, dress and eat is inseparable from the art they make. 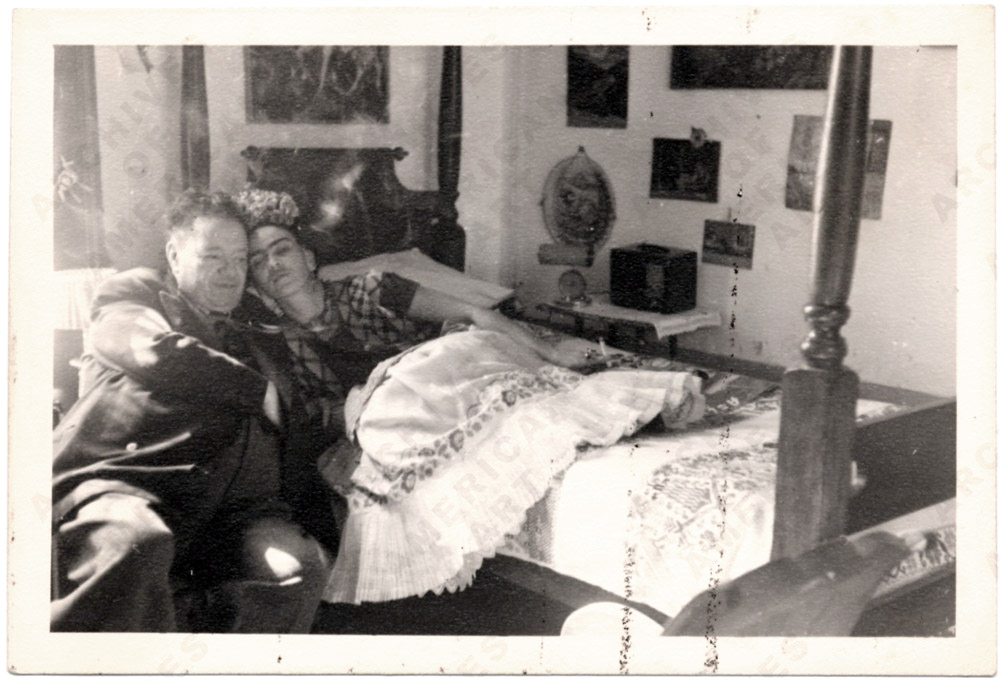 The museum visit has been a great contribution to our perception of their art. At first glance the local and traditional ways they adopted makes it a bit difficult to place them in the twentieth century. Frida wore a fusion of traditional costumes, Diego reinvented the art of murals, their house was built with volcanic stones and they cooked using a wood stove (gas stoves were common back then), but they lived right at the time of the global socialist revolution and died well after the turn of modernism. The popularity of Frida merchandise is very understandable due to the strong character projected on the surface of everything she did. But, as always is the case, there is so much more behind the fridge magnets…

Serkan and Gladys were preparing to open a small restaurant in the area. They had so much work to do in the eve of the opening and Serkan mentioned that he hadn’t been able to paint the facade of the restaurant the way he designed it. We wanted to help them, so spent a day resurfacing the facade and painting it in the rain. 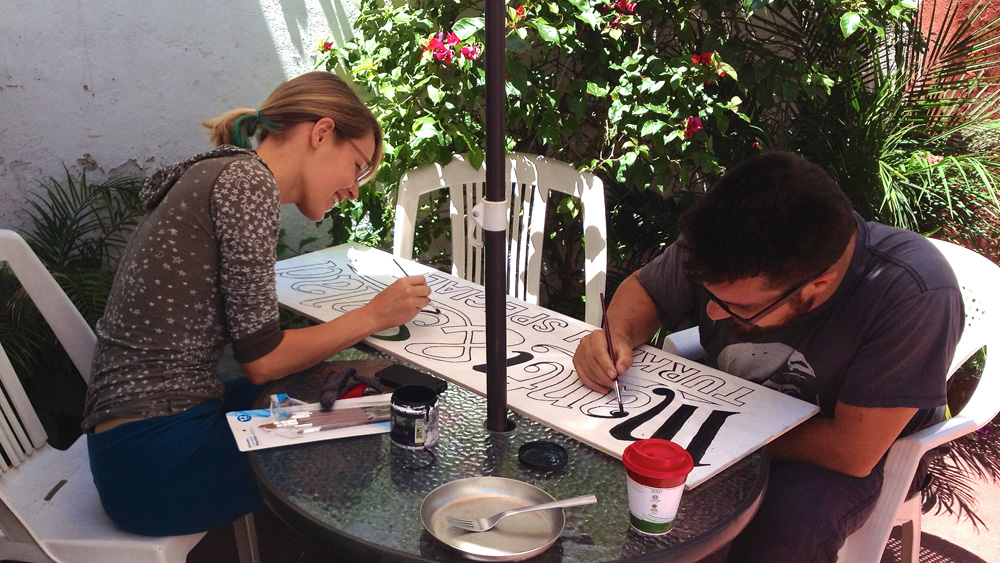 It’s no Diego Riviera mural, but the execution matched his design pretty well… They were also missing the signage for the place. Being hardworking immigrant workers, we also made a cute hand painted signage! It was great getting our hands dirty designing type! 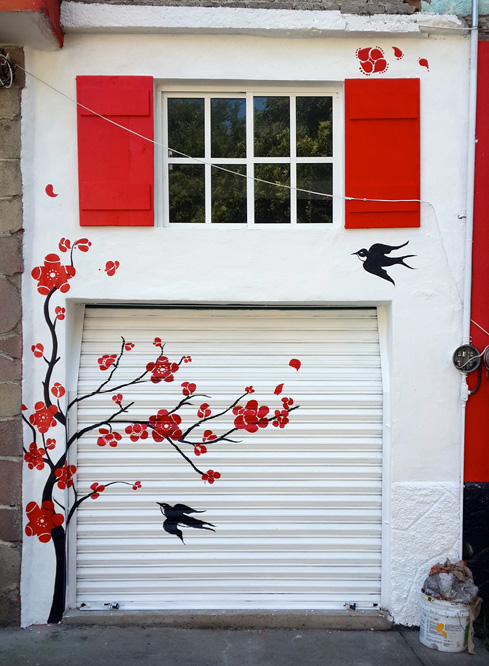 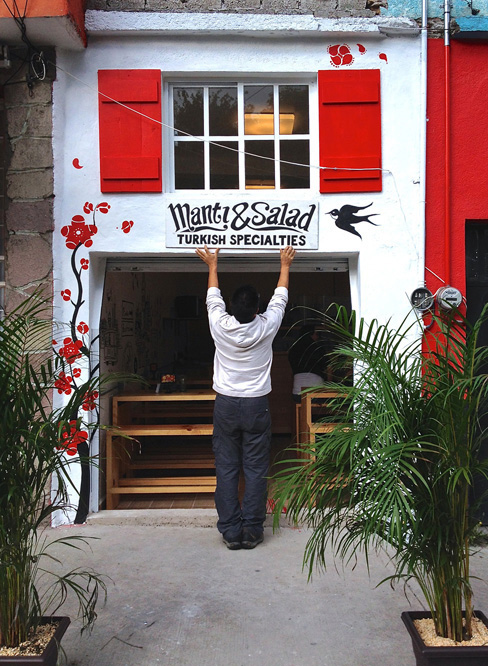 Mexico City is so large, it’s impossible to get a sense of it walking around or using the subway system (the largest in Latin America and second largest in the entire Americas). So we opted, with a little hesitation and shame, for the tourist bus that circles the city! 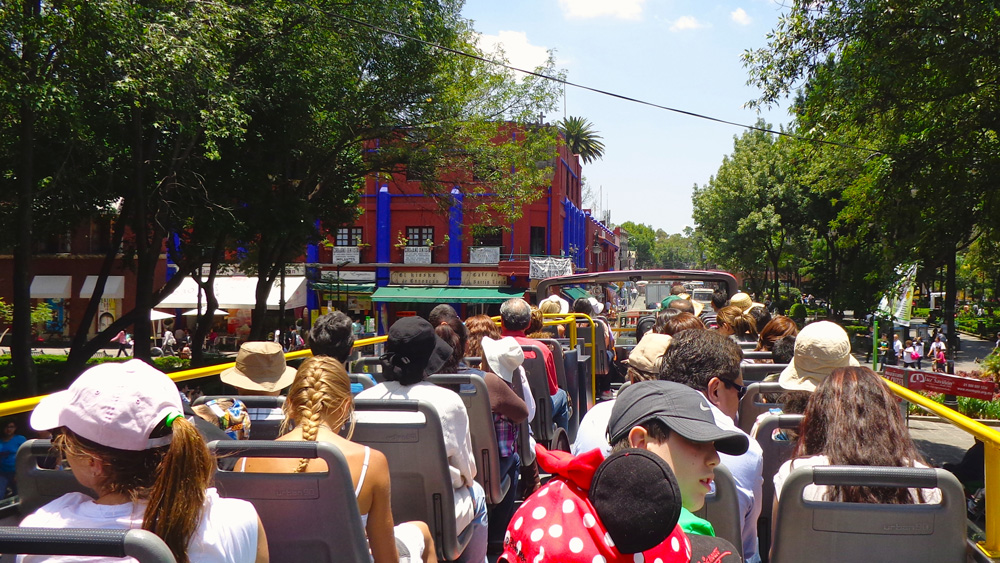 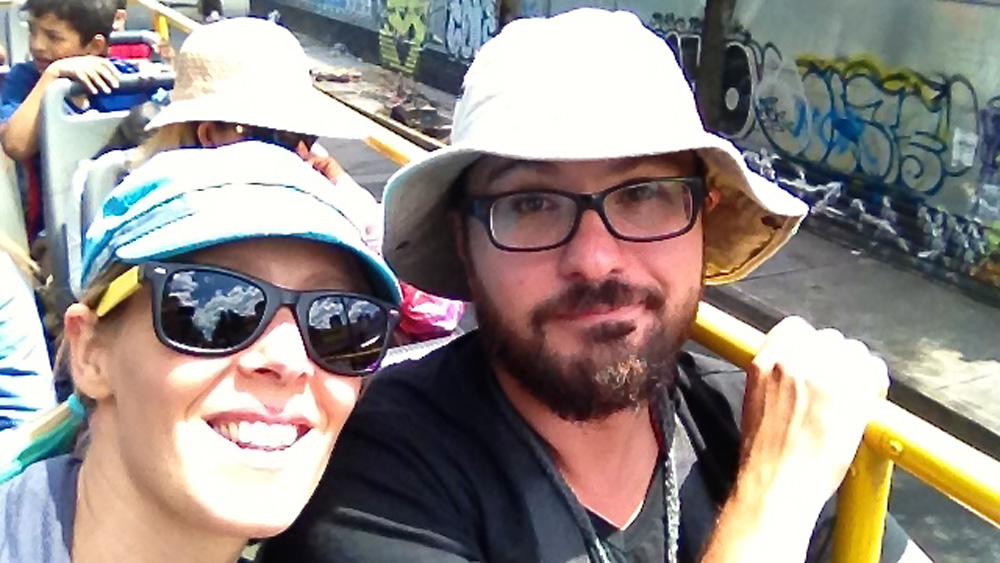 It took us well over 8 hours riding on the open-top of a double decker. Here are some images from the trip.

By the time we finished, I was alone, soaking wet in the dark! Yes, I rejected moving downstairs despite the rain like some other wiser people! After all, I am a real biker, and you don’t get to be one if you don’t ride in rain! Here I am trying to warm up at the faint fire of a “Taco Al Pastor”… 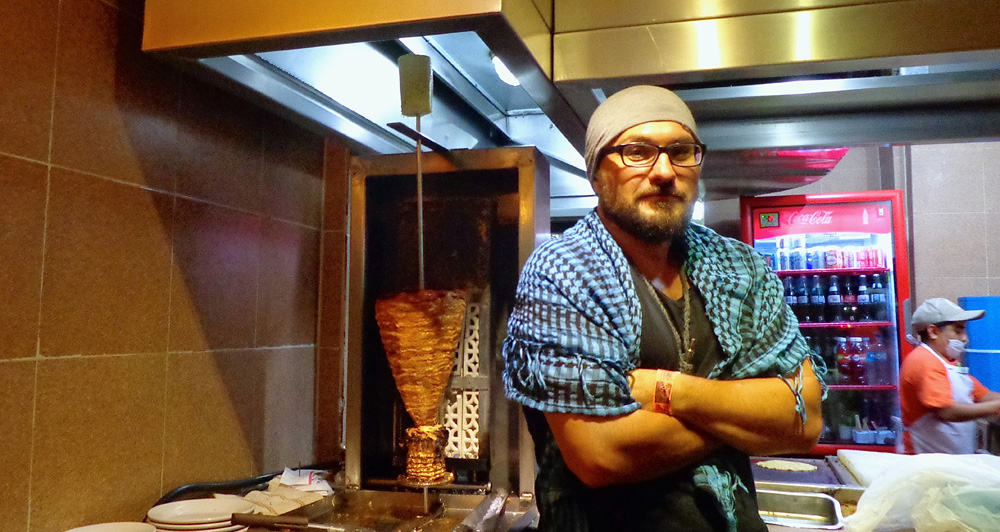 The Anthropology Museum carries a very rich collection of artifacts from all around Mexico. In fact, some of the most significant remains are not to be found in the local ruins, but here in the capital. 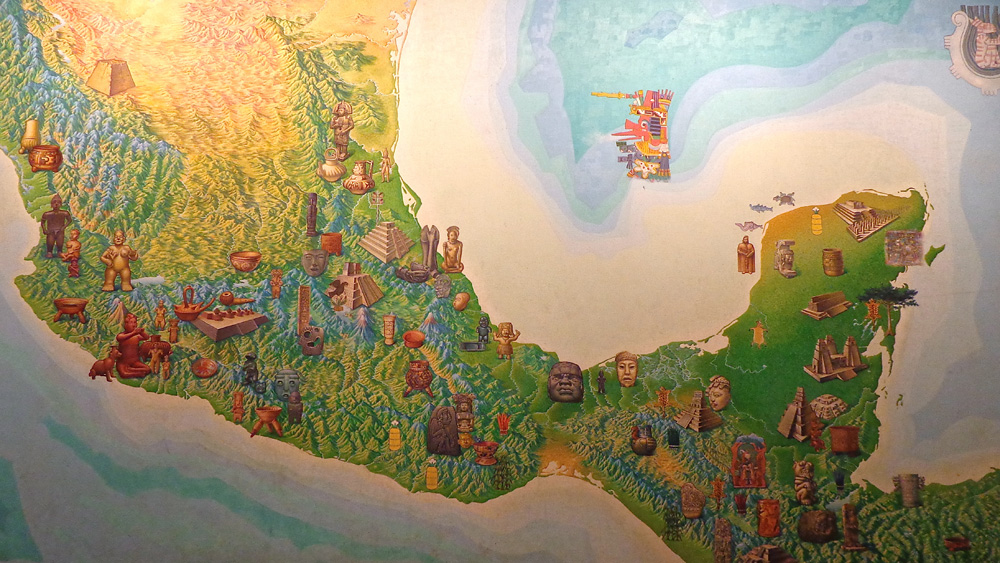 So we had to spend an entire day at the museum and got to see less than half of it. The significant half including North, West, Maya, Mexican Gulf, Oaxaca, Mexico, Toltec, and Teotihuacan. The last of which will be our first destination on our way out of the city.

It feels like every stop we made so far has proven to be much more rewarding than our expectations. Mexico City took a week… A week full of experiences and warm friendship thanks to Serkan and Gladys. I wonder if this city marks the furthest reach of what we know to be familiar.